When we write raiding it’s not as in the old days, but it still involve a lot of fighting though. This time I had to go fight in the largest and toughest club tournament in the world of Buhurt. I was so lucky that even though my own team was unable to go, I was offered a place on the team of Russian Order. I went there thinking a lot about Russia and everything I had heard and thought I knew, but I was not very clear about what Russia was actually like, and my head was filled with thoughts about the fighting as well and about not letting any of the other guys down. When I arrived Viacheslav Mishurin, a great friend, picked me up, and we went to visit a great guy and now friend named Morgan. This is where the Russian kicks in, from start till end, I never saw any food being made, but there were always plenty of it. I did not know anyone except Viacheslav, but they all treated me as a friend. The fighting was the day after, so we double-checked my armour just to be sure nothing was wrong, so I got to bed a bit late. My mind was racing, because I didn’t want to let any of the guys down, and I was so excited about the fighting the next day.

On the day of the five versus five fights, I got up, telling myself that we had to kill it today. I have to go a bit overboard hyping myself internally. But it worked. We left the house after a solid breakfast, and went to the Moscow Olympic Center. We arrived to the chaos of fighters, I’m not sure of exactly how many, but I would think around 200, and on top of that there was the support staff and so on. We got our gear to our place, said hello to old friends from across the globe, Chinese, Americans, French and many more. We started gearing up, and the rest of the team started arriving. All of them hard Russians, but all friendly and saying how happy they were to see that I was a big and solid guy. Our first fight was with a team from Argentina. In the first round, I threw a guy over pretty fast. Throughout the fights, I made some smaller rookie mistakes, but did pretty well. My training paid off, but there was a clear message to me, that a team needs communication. We had fighting spirit, we had strong guys, but I couldn’t really communicate with them effectively. We had some great fights. We beat the Argentinian team, the Polish team, fought close with the French team, but lost, because of me unfortunately. The last fight for me was against Bear Paw, one of the very best Russian teams, and a really tough fight. So what did all this give me? And why are these trips worth the hardship and money? I like to believe that all of my training up too these fights, leads to discipline, or at least needs discipline to happen. Anybody that steps into that ring have my respect. We invaded Russia, with culture and steel as our forefathers did centuries. We need to travel, learn, give and experience, to love what we have or want to build. So my future plans is to train even harder, to go to even more places and be the best me I can be. That is what the Viking Movement and Einherjarwear is all about. Take the reins of your life and fight for it, because no one else will. 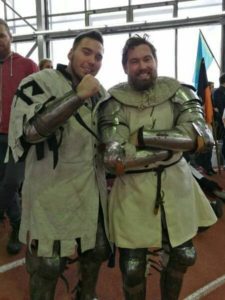 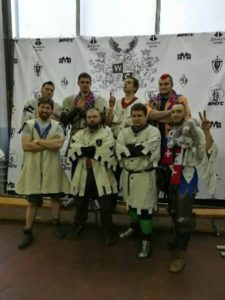