The Einherjar Crew celebrated the Winter Solstice by attending a Blót and a feast with other likeminded, from the Blót group Gleipner. They reside in the north of Denmark. It all started by meeting up in the middle of an awesome location in the forest, where we were led deeper into the by a long trail of lanterns. Most of the rituals and the people are secret, but there is a few pictures of the sun wheel, which was part of the ritual of getting the sun back from the dark. When the Blót itself and the Aesir toast “gudeskålen” ended most of us went together to eat and feast with lots of food, mead and good company. The dark feels like nothing when you light it up and spend the time with Friends and family! 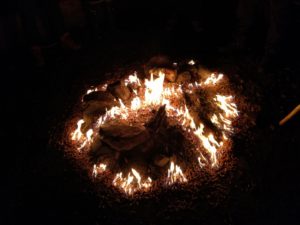 The feast was a classic Yule meal, as so many in Denmark. Lots of meat and other traditional foods, like risalamande, a sweet rice pudding. Some would say that it is not very “Viking” but all these traditions is either old Danish and very classic or they are part of the FEAST traditions. In a Catholic mind, that is not how you celebrate the holidays. However, we feast and go all in on food and Hygge (being cosy and together), where the Christians in many ways would fast (The fast of Saint Philip/Nativity fast). Fasting for us seems crazy; there is no better way to kill the darkness than indulge in food made with love and care. Traditions and facing the darkness is how you get stronger and better. 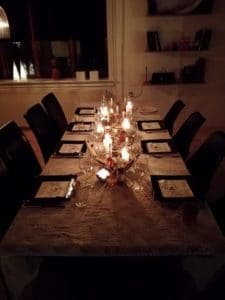 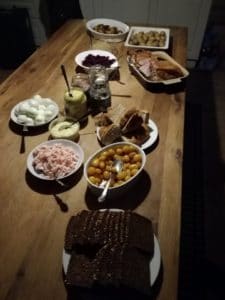 The Tradition.
Most people, including Danes and other Scandinavians, now a day consider Yule to be a Christian holiday, the celebration of the birth of Jesus Christ. The old traditions from old Nordic folklore have been replaced by the more modern ones, including a Danish Santa Claus, – and instead of the old Yule festival we celebrate a younger holiday imported from the Middle East, when Christianity came to Scandinavia. In the early times of Christianity in Scandinavia, some people tried to outlaw the old pagan festivities and celebrations, as they tried to outlaw much of the older faith. The new holiday was supposed to be called ‘Kristmesse’ (literal translation of Christmas), and be a celebration of the birth of Christ, but old ways seldom change so easily. Today most people in Scandinavia still use the old names of the holiday. In Denmark we call, it ‘Jul’, as does people in both Norway and Sweden, and in Iceland they still uses ‘Jól’. Many of the old traditions remained in the celebration, but was overtime changed and adapted to the Christian faith. Instead of honouring the old gods, people honoured Jesus Christ and the Christian God, but they did so in much the same way as they had once honoured Odin and the other Aesir. One thing from the old folklore to remain to this day is the ‘Nisse’, originally a house spirit who protected the house in return for some porridge. When angered or slighted in some way the ‘Nisse’ could become quite dangerous and might even burn down the farm, so it was wise to remain on his good side, because then he could be very helpful. Now a day, ‘Nisser’ is in Denmark fought to help Santa Clause in his workshop or live in various places, often pulling playful pranks on humans.